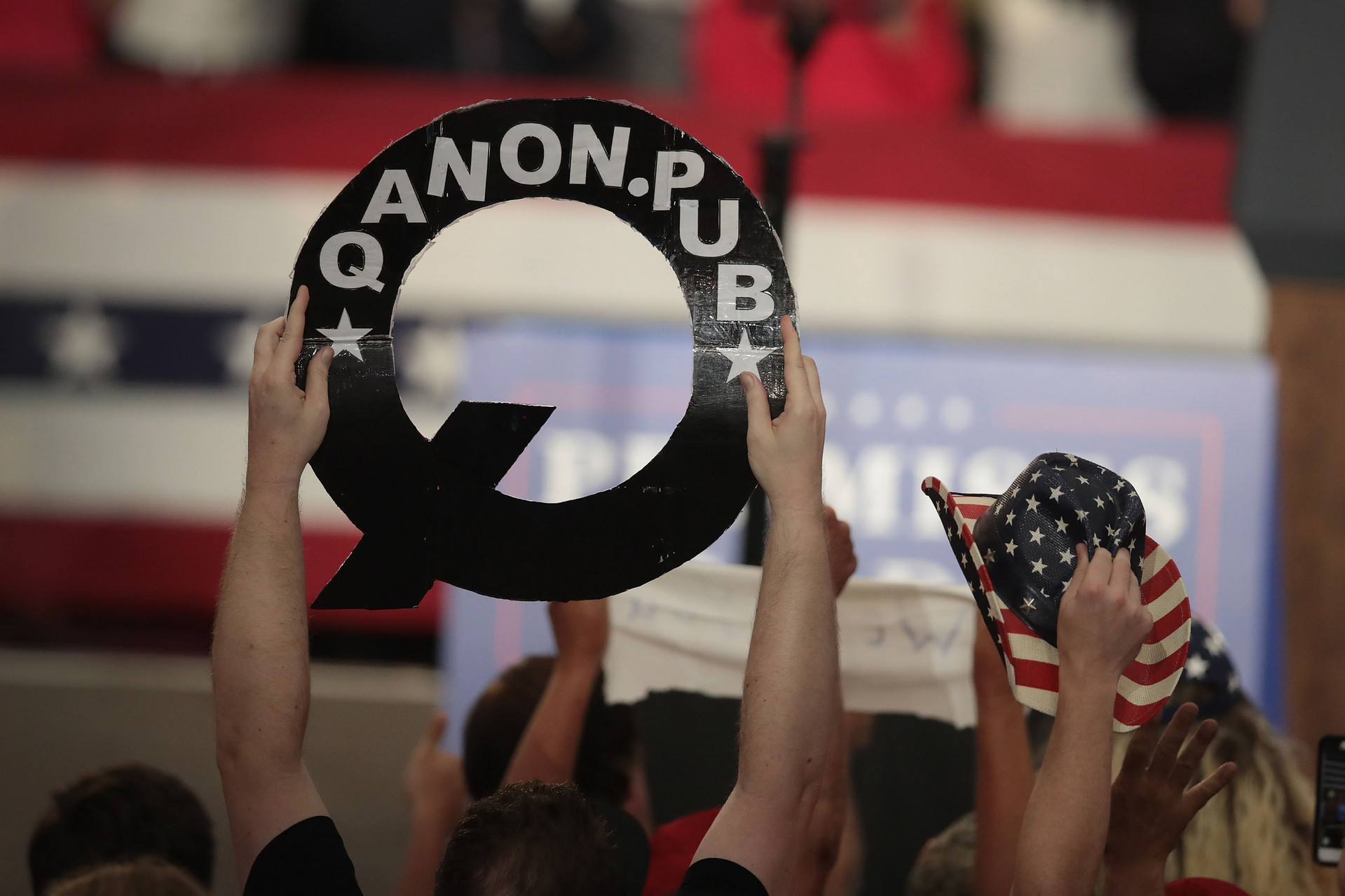 George Soros directs a “deep state” global conspiracy network. A Joe Biden win would put America in control of “Jews and Blacks.” The Democratic nominee has a pedophilia problem.

Wild disinformation like this is inundating Spanish-speaking residents of South Florida ahead of Election Day, clogging their WhatsApp chats, Facebook feeds and even radio airwaves at a saturation level that threatens to shape the outcome in the nation’s biggest and most closely contested swing state.

The sheer volume of conspiracy theories — including QAnon — and deceptive claims are already playing a role in stunting Biden’s growth with Latino voters, who make up about 17 percent of the state’s electorate.

“The onslaught has had an effect,” said Eduardo Gamarra, a pollster and director of the Latino Public Opinion Forum at Florida International University.

“It’s difficult to measure the effect exactly, but the polling sort of shows it and in focus groups it shows up, with people deeply questioning the Democrats, and referring to the ‘deep state’ in particular — that there’s a real conspiracy against the president from the inside,” he said. “There’s a strain in our political culture that’s accustomed to conspiracy theories, a culture that’s accustomed to coup d'etats.”

Gamarra, a political science and international relations professor with extensive experience polling in Latin America and Hispanic voters in Florida, pointed to recent large-sample surveys of Latinos in the state and in the Latino-heavy county of Miami-Dade. They showed Biden underperforming with this crucial Democratic leaning segment of the electorate, though he’s still running ahead of President Donald Trump by double digits. The race overall in the state is essentially tied.

Florida’s Latino community is a diverse mix of people with roots across Latin America. There’s a large population of Republican-leaning Cubans in Miami-Dade and a growing number of Democratic-leaning voters with Puerto Rican, Colombian, Nicaraguan, Dominican and Venezuelan heritage in Miami and elsewhere in the state. Many register as independents but typically vote Democratic. Those independents — especially recently arrived Spanish-speakers — are seen as more up for grabs because they’re less tied to U.S. political parties and are more likely than longtime voters to be influenced by mainstream news outlets and social media.

Democrats fear that’s where the role of disinformation and conspiracy theories might prove effective against Biden, because it plants seeds of doubt in an otherwise-Democratic bloc of the electorate that the former vice president needs to win. The net effect would be to depress turnout, possibly enabling Trump to carry a state that is essential to his reelection.

Biden’s struggles can’t all be chalked up to election disinformation. The GOP under Trump mastered social media, especially Facebook use, in 2016 and even Democrats acknowledge that Republicans have made inroads in the aggressive use of WhatsApp encrypted messaging.

At the same time, there has been a rise of Spanish-language conservative media, especially revolving around politics connected to Colombia and Venezuela, that are increasingly showing up in the social media feeds of South Florida’s Latin America diaspora communities. They’re finding common cause with Cuban-Americans, who dominate Spanish-language radio airwaves and have been a bulwark of Republican support in Florida’s otherwise Democratic-leaning and diverse Hispanic communities.

But where radio is easy to hear for all, Facebook is harder to track. And the encrypted messaging system it bought, WhatsApp, is even more difficult.

WhatsApp group chats are widely popular among Latin Americans and other immigrant communities in the U.S. because the app doesn't require a U.S. phone number or specific mobile service provider, making it easy to stay in touch with family abroad via text or voice communication. Group chats within the closed network can easily be created with dozens of people anywhere in the world. Plus, iPhones aren’t as popular in Latin America — meaning iMessage chats are not an option for many.

Political campaigns, social justice movements and support groups have followed along, making WhatsApp a top tool for reaching voters in Latin America and from Latin America.

In South Florida, veteran Latino Democratic strategist Evelyn Pérez-Verdia noticed this summer that the WhatsApp groups dedicated to updates on the pandemic and news for the Colombian and Venezuelan communities became intermittently interspersed with conspiracy theories from videos of far-right commentators or news clips from new Spanish-language sites, like Noticias 24 and PanAm Post, and the YouTube-based Informativo G24 website.

“I’ve never seen this level of disinformation, conspiracy theories and lies,” Pérez-Verdia, who is of Colombian descent, said. “It looks as if it has to be coordinated.”

Republicans say people on both sides of the political aisle are sharing disinformation organically, although they can’t point to similar conspiracy theories espoused by the left. And they accuse Democrats of labeling every opinion or news story they disagree with as disinformation.

For instance, in a Covid WhatsApp chat group, a Republican posted a statement that real Catholics can’t be Democrats, which Pérez-Verdia found objectionable. But the group chat’s founder and administrator, businessman and former Republican Miami-Dade County Commission candidate Alfred Santamaria, said he didn’t ban the comment because he believed people should have freedom of expression.

Still, Santamaria conceded, political toxicity is rising on the platform.

“I see more tension, more fighting, more radicalism. I see a level of tension of people posting for and against the administration,” he said.

Some of the information shared in chat groups and pulled from YouTube and Facebook goes beyond hyperbolic and caustic rhetoric.

On Informativo G24, longtime Colombian news anchor Sandra Valencia brings on guests via webcam for discussions about Latin America and U.S. politics with analysis that often relies on conspiracy theories, such as how Black Lives Matter and other activist groups are planning a “siege” on the White House later this month. The site does not detail who funds it, but asks supporters to donate to a PayPal account registered to Valencia.

Valencia bills her Spanish-language YouTube page, which has more than 378,000 followers, as a channel for geopolitical analysis. But it often resembles English-language right-wing news sources, such as Infowars, sharing conspiracy theories and strong anti-globalization messages.

And unlike the conspiracy theories that circulate in English-language news media and social media, there’s relatively little to no Spanish-language media coverage of the phenomenon nor a political counterpunch from the left.

Some of the disinformation discussed on Informativo G24 has been led by Omar Bula-Escobar, a former United Nations representative and Colombian geopolitical analyst, who in recent years has become a frequent guest on various Latin American radio and television news shows to talk about globalization. Bula-Escobar, who’s also a frequent guest on Miami-based Radio Caracol — which is one of Colombia’s main radio networks and widely respected throughout Latin America — has gained an increasing amount of notoriety for pushing the claim, often seen as anti-Semitic, that billionaire George Soros is “the world’s biggest puppet master” and is the face of the American Democratic Party.

“Who’s going to celebrate the day, God forbid, Trump loses? Cuba; ISIS, which Trump ended; Hezbollah, which Obama gave the greenlight to enter Latin America; Iran; China … All the filth of the planet is against Donald Trump. So, if you want to be part of the filth, then go with the filth,” Bula-Escobar said in a recent episode of Informativo G24.

Other shared content has included a translated clip of Christian conservative pastor John MacArthur claiming there is no pandemic and coronavirus death numbers have been wildly exaggerated.

In June, a Noticias 24, a Venezuela-focused news site that has a large following in Latin America, amplified disinformation with a story bearing the headline “social networks also accuse Joe Biden of being a pedophile.” A month later, when the lie resurfaced, “#BidenPedofilio” trended in Spain.

On Facebook, a Puerto Rican-born pastor Melvin Moya has circulated a video titled “Signs of pedophilia” with doctored videos of Biden inappropriately touching girls at various public ceremonies to a song in the background that says, “I sniffed a girl and I liked it.” The fake video posted on Sept. 1 has received more than 33,000 likes and 2,400 comments.

Much of the shared content cannot be traced to a specific campaign or political organization. Still, fake videos and news stories are being widely shared in Facebook groups offering support for Trump.

And various fake stories across WhatsApp and Facebook claim that Nicolás Maduro’s socialist party in Venezuela and U.S. communist leaders are backing Biden.

“It’s really just a free-for-all now,” said Raúl Martínez, a Democrat who served as mayor of the largely conservative, heavily Cuban-American city of Hialeah for 24 years and is now host of a daily radio show on Radio Caracol. “It’s mind boggling. I started in politics when I was 20. I’ve never seen it like this.”

Martínez, 71, said it has been particularly frustrating to see the prevalence of disinformation in South Florida Spanish-language stations, which many older Latinos in the area still rely on for information.

“When I hear from other stations, they haven’t just sipped the Kool-Aid. They drank the whole thing,” Martínez said.

Radio Caracol, for its part, received unwelcome attention Aug. 22 when it aired 16 minutes of paid programming from a local businesssman who launched into an anti-Black and anti-Semitic rant that claimed a Biden victory would mean that the U.S. would fall into a dictatorship led by “Jews and Blacks.” The commentator claimed that Biden is leading a political revolution “directed by racial minorities, atheists and anti-Christians” and supports killing newborn babies.

When Miami state Sen. Annette Taddeo, a Colombian-American who is also Jewish, heard the programming, she quickly called out the station on Twitter for “the disgusting message, spoken by Trump supporters,” adding that “We all — regardless of parties — have an obligation to repudiate and condemn this pro-Nazi and racist discourse.”

However, the 16-minute program did not receive coverage from local media outlets despite the outwardly racist and xenophobic messaging, a reminder that much of the Spanish-language disinformation and conspiracy theories circulating in South Florida remain unchecked.

Caracol management promptly apologized for the content and said it banned the commentator, local businessman Jorge Gonzalez, from the airwaves. A Caracol spokesman said Gonzalez had initially purchased the radio time to talk about business, not politics, let alone racist politics. Gonzalez couldn’t be reached for comment.

Then, on Friday, the editor of the Spanish-language sister paper of The Miami Herald, El Nuevo Herald, publicly apologized for its own paid-media scandal after running a publication called “Libre” as a newspaper insert that attacked Black Lives Matter and trafficked in anti-Semitic views.

"What kind of people are these Jews? They're always talking about the Holocaust, but have they already forgotten Kristallnacht, when Nazi thugs rampaged through Jewish shops all over Germany? So do the BLM and Antifa, only the Nazis didn't steal; they only destroyed,” the ad insert said.

The publication said it's suspending its relationship with Libre.

Conspiracy theories — especially revolving around QAnon, which posits that Trump is fighting a global cabal of satanic pedophiles — are spreading across Spanish-language radio in Miami as well, said Roberto Tejera, a political independent who has a show on Actualidad Radio. Tejera said QAnon is a constant on another station, La Poderosa, whose station management also did not respond to messages seeking comment.

“It’s not right wing. I don’t have a problem with right-wing stuff. It’s QAnon stuff. This is conspiracy theory. This goes beyond. This is new. This is a new phenomenon in Spanish speaking radio. We Cubans are not normal,” Tejera laughed, “but this is new. This is crazy. This is f---ing crazy.”

Politico — SABRINA RODRIGUEZ and MARC CAPUTO contributed to this report.