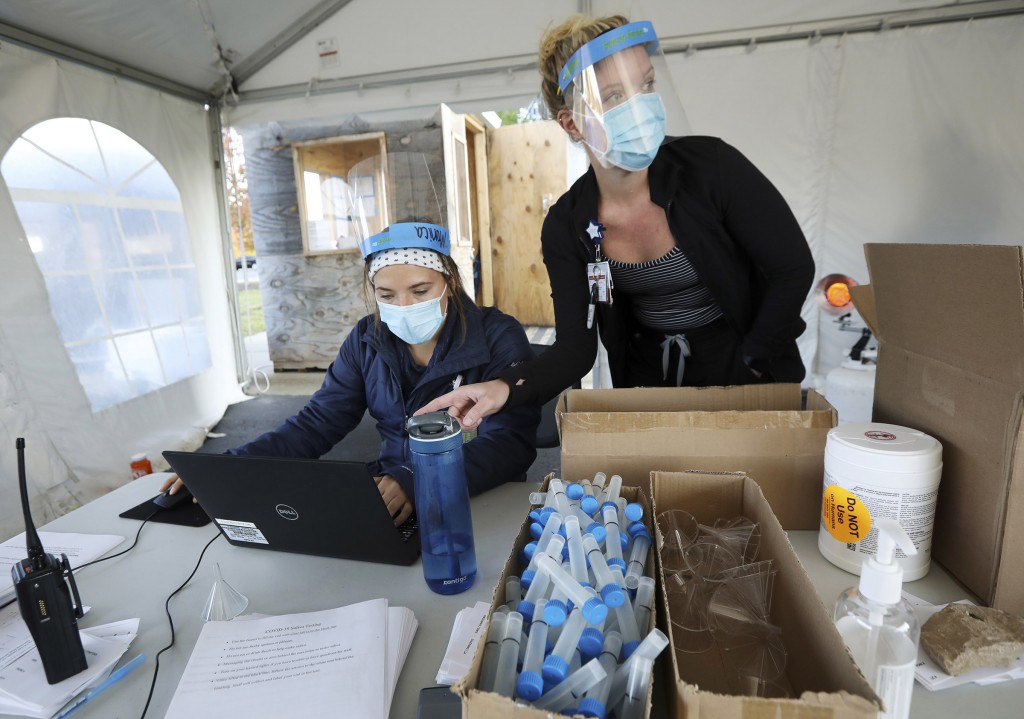 "This really is a harrowing time, and people have to be careful," epidemiologist Dr. Abdul El-Sayed told CNN on Saturday.

"When we saw this kind of transmission earlier in the pandemic, in March and April, the virus hadn't seeded everywhere ... This surge has the potential to be way worse than it was than either the spring or the summer," El-Sayed, Detroit's former health director, said.

The US reported more than 69,100 new Covid-19 infections Friday -- the most in a single day since about 71,300 were reported July 29, according to Johns Hopkins University data.

As for the entire country, cases are swinging up after a summer surge waned.

Daily US case averages had dipped to around 34,300 by September 12. But now, the country is averaging more than 55,000 new cases daily over the past week -- up more than 60% since mid-September's dip. 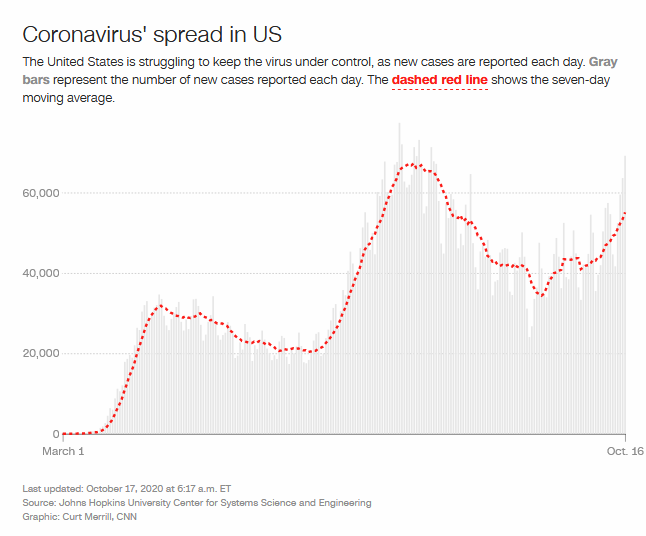 Covid-19 hospitalizations also are climbing nationwide. And they'll likely be followed by a rise in daily coronavirus deaths, says Dr. Francis Collins, director of the National Institutes of Health.

"This is a good moment for people to stop and ask themselves, 'What can I do to try to be sure that we limit the further infections that otherwise seem to be looming in front of us as cold weather is kicking in and people are indoors, and those curves are going upward, in the wrong direction?' " Collins said Friday.

The country recently has averaged about 700 Covid-19 deaths a day, below the daily tolls above 1,000 from late July to mid-August.

But University of Washington researchers project more than 2,300 Americans could die daily by mid-January, and a total of more than 389,000 people could die from the virus in the US by February 1.

More than 218,000 people have died from Covid-19 nationwide since the start of the pandemic. Just over 8 million US cases have been reported.

More than 30 states --- scattered across the US -- have accumulated more new cases in the last week than they did in the previous week, according to data from Johns Hopkins University.

Experts say Americans can help get the virus under control by heeding guidelines touted by officials for months: avoiding crowded settings, keeping a distance, keeping small gatherings outdoors, and wearing a mask.

The upticks have prompted state leaders to push new measures, like mask enforcements and gathering limits, in hopes of curbing the spread.

US Surgeon General Dr. Jerome Adams addressed a surge of new cases and hospitalizations in Wisconsin and said the state's test-positivity rates are "going in the wrong direction."

"It is critical that we actually understand where this virus is circulating so that we could get cases under control and reverse positivity," he said Friday in Neenah, Wisconsin, while announcing a new testing location there.

In Minnesota, public health officials say they've so far traced at least 20 cases of the virus back to a rally held by President Donald Trump last month, or to related events.

Of the 20 cases,16 are among people who attended the rally. Four people said they participated in counter-protests the same day, the state's health department told CNN.

The state has traced a total of 28 cases to various campaign events in recent weeks. One was linked to a rally for Democratic presidential candidate Joe Biden and three were linked to a Minneapolis speech by Vice President Mike Pence in late September.

Ahead of an expected Trump rally this weekend, Michigan Gov. Gretchen Whitmer encouraged people who were planning to attend to wear masks and social distance.

"We always are concerned when there are large gatherings without masks and social distancing. There is a risk of an outbreak when this happens, so we encourage people to wear their masks and practice social distancing," Tiffany Brown, Whitmer's press secretary, told CNN in a statement.

And in Tucson, Arizona, where Trump is scheduled to hold a political rally Monday, the mayor wrote an open letter to remind campaign officials of the "various ordinances in effect" in the city and county.

"It would be deeply unfortunate if one gathering jeopardized all the progress we have made thus far," Mayor Regina Romero wrote.

In an open letter published Friday by Pfizer Chairman and CEO Albert Bourla, the company said it plans to apply for emergency use authorization for its Covid-19 vaccine as early as November.

"Assuming positive data, Pfizer will apply for Emergency Authorization Use in the US soon after the safety milestone is achieved in the third week of November," the letter said.

But first, Bourla wrote, the vaccine should prove to be safe and effective in preventing the disease.

"And finally, we must demonstrate that the vaccine can be consistently manufactured at the highest quality standards," Bourla wrote.

Once a vaccine is approved in the US, CVS and Walgreens pharmacies have been designated to help distribute free vaccines to long-term care facilities, federal officials confirmed. It will be up to the two drug chains to figure out how to deliver the vaccines, including cold storage requirements and personal protective equipment.

"This is a completely voluntary program on the part of every nursing home. This is an opt-in program," Paul Mango, deputy chief of staff for policy at the Health and Human Services Department, told reporters.


CNN — Christina Maxouris and Jason Hanna contributed to this report.