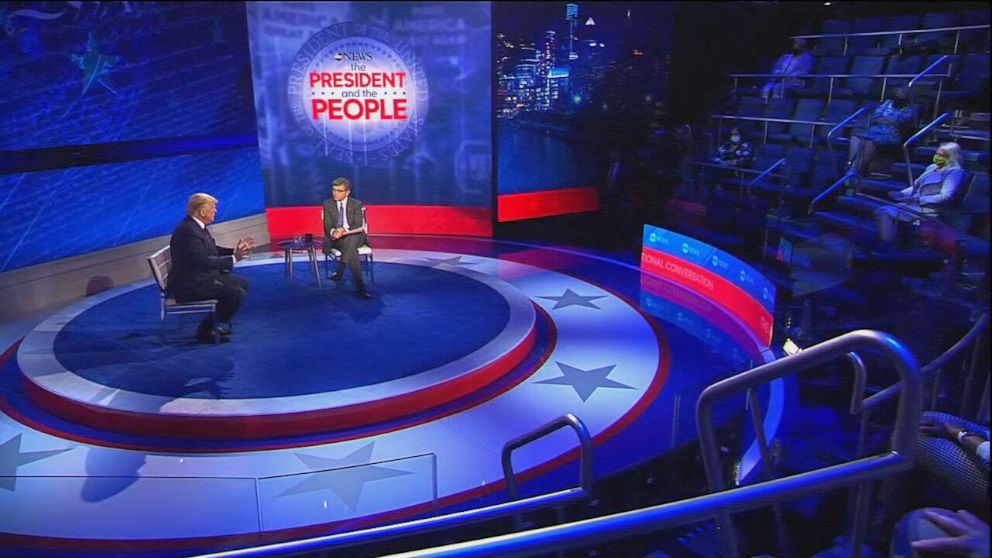 As the 2020 Tour de France comes to its final stages, I thought I would use some cycling metaphors to assess the town hall meeting ABC News held with President Donald Trump, seven weeks ahead of Election Day.

The Tour is one of the most grueling and difficult sporting events in the world, and is often described as a "team sport with an individual winner." the same is true of presidential campaigns. They are incredibly grueling, politically, and there is one winner declared after Election Day. But in order to succeed, the candidate must have effective national, state and local parties assisting, as well as independent organizations who can provide much-needed advantages.

Held during the final 49 days of the presidential race, the town hall was like a time trial in cycling. In a time trial, a cyclist is alone against the clock with no opponent in the vicinity. Similarly, the town hall Tuesday was a candidate by himself trying to gain some much-needed points in the race.

This time trial of a town hall is designed to set things up for the later stages, and for the real race, held in the mountains at the debates. One of the main goals in cycling at the time trial is to not make mistakes or fall and lose valuable time heading to the later stages.

So how did Trump do on his time trial? And, did he begin to climb closer to his opponent, Joe Biden, who is currently ahead?

The most fascinating part of this town hall was that voters wanted our president to be held accountable for what he says and what he does. They each set out to hold the president's feet to the fire while bringing an array of different issues to his attention -- hoping he would budge and admit to his mistakes.

As I learned from working for President George W. Bush in the past, one of the biggest problems is the bubble that surrounds the White House is that when a candidate only does friendly interviews, it puts him or her at a severe disadvantage when confronted with facts, and with how voters really feel.

Since the president spends most of his time talking to Fox News -- whose journalists give him some of the friendliest interviews, with the exception of Chris Wallace -- he is unprepared for the reality of non-supporters.

Participating in the town hall was probably a good thing for Trump to do before his first debate with Biden, because it may have woken him and his staff up to the real problems in the country, his presidency and his campaign. From what we saw of his interactions at the town hall, the president isn't prepared to be confronted to objective media and undecided voters. We will see if that changes.

So, if we look at the town hall as a time trial, like the Tour de France, we can say that the president didn't gain any time on Biden in this race, which is a huge missed opportunity. Every day that goes by where Trump doesn't cut ahead of Biden is a bad day for the president. He needs to make up ground, and tonight didn't help him do that.

In fact, the president, with his tendency to promulgate falsehoods and his inability to answer simple questions and connect in a heartfelt way with the questioners, slipped the peddle and crashed his bike on this political time trial. He probably didn't lose much time to Biden, but he is likely going into the mountain stages of the debates with no momentum. And that is a big problem in this grueling race.

While the ABC News town hall likely did not entirely alter the fundamentals of the presidential race, Trump's poor performance will make it harder for him to make up ground at a time when a majority of the country believes the nation is on the wrong track and disapproves of his job as president.

Moments like this one serve as windows into who leaders truly are, and upon that metric, Trump reinforced nearly all the negative views Americans have of him. He still has time to adjust this race, which currently favors Biden, but in his upcoming debate, he will have to adopt a very different strategy. Will he and his team understand the problem they face and the weaknesses that were revealed in the town hall? Time will tell.