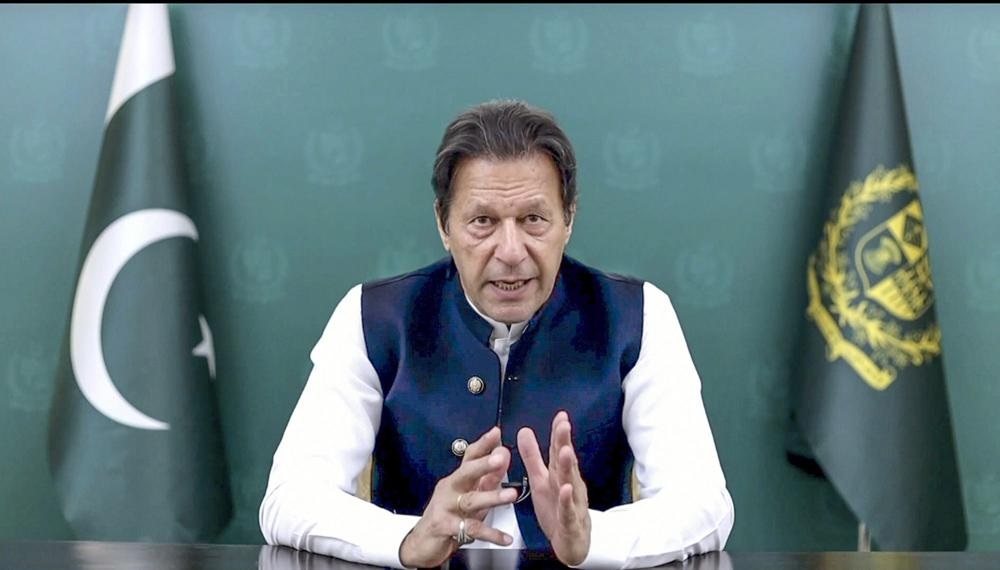 Prime Minister Imran Khan sought to cast Pakistan as the victim of American ungratefulness and an international double standard in his address to the United Nations General Assembly on Friday.

In a prerecorded speech aired during the evening, the Pakistani prime minister touched on a range of topics that included climate change, global Islamophobia and “the plunder of the developing world by their corrupt elites” — the latter of which he likened to what the East India Company did to India.

It was for India’s government that Khan reserved his harshest words, once again labeling Indian Prime Minister Narendra Modi’s Hindu nationalist government “fascist.” But the cricketer turned posh international celebrity turned politician was in turn indignant and plaintive as he painted the United States as an abandoner of both Pakistan and neighboring Afghanistan.

“For the current situation in Afghanistan, for some reason, Pakistan has been blamed for the turn of events, by politicians in the United States and some politicians in Europe,” Khan said. “From this platform, I want them all to know, the country that suffered the most, apart from Afghanistan, was Pakistan when we joined the U.S. war on terror after 9/11.”

He launched into a narrative that began with the United States and Pakistan training mujahedeen — regarded as heroes by the likes of then-President Ronald Reagan, he said — during the Soviet occupation of Afghanistan. But Pakistan was left to pick up the pieces — millions of refugees and new sectarian militant groups — when the Soviets and the Americans left in 1989.

Khan said the U.S. sanctioned its former partner a year later, but then came calling again after the 9/11 attacks. Khan said Pakistan’s aid to the U.S. cost 80,000 Pakistani lives and caused internal strife and dissent directed at the state, all while the U.S. conducted drone attacks.

“So, when we hear this at the end. There is a lot of worry in the U.S. about taking care of the interpreters and everyone who helped the U.S.,” he said, referring to Afghanistan. “What about us?”

Instead of a mere “word of appreciation,” Pakistan has received blame, Khan said.

Despite Khan’s rhetoric espousing a desire for peace, many Afghans have blamed Pakistan for the Taliban’s resurgence in Afghanistan because of close links. The United Nations in August also rejected Pakistan’s request to give its side at a special meeting on Afghanistan, indicating the international community’s shared skepticism.

In his speech, Khan echoed what his foreign minister, Shah Mehmood Qureshi, told The Associated Press earlier this week on the sidelines at the U.N.: the international community should not isolate the Taliban, but instead strengthen the current Afghan government for the sake of the people.

He struck an optimistic tone about Taliban rule, saying their leaders had committed to human rights, an inclusive government and not allowing terrorists on Afghan soil. But messages from the Taliban have been mixed.

A Taliban founder told the AP earlier this week that the hard-liners would once again carry out executions and amputated hands — though this time after adjudication by judges, including women, and potentially not in public.

“If the world community incentivizes them, and encourages them to walk this talk, it will be a win-win situation for everyone,” he said.

Khan also turned his ire on that same community for what he perceives as a free pass given to India.

“It is unfortunate, very unfortunate, that the world’s approach to violations of human rights lacks even-handedness, and even is selective. Geopolitical considerations, or corporate interests, commercial interests often compel major powers to overlook the transgressions of their affiliated countries,” Khan said.

He went through a litany of actions that have “unleashed a reign of fear and violence against India’s 200 million strong Muslim community,” he said, including lynchings, pogroms and discriminatory citizenship laws.

As in years past, Khan — who favors delivering his speeches in his British-inflected English, in contrast to Modi’s Hindi addresses — devoted substantial time to Kashmir.

“New Delhi has also embarked on what it ominously calls the ‘final solution’ for the Jammu and Kashmir dispute,” Khan said, rattling off a list of what he termed “gross and systematic violations of human rights” committed by Indian forces. He specifically decried the “forcible snatching of the mortal remains of the great Kashmiri leader, ” Syed Ali Geelani , who died earlier this month at 91.

Geelani’s family has said authorities took his body and buried him discreetly and without their consent, denying the separatist leader revered in Kashmir a proper Islamic burial. Khan called upon the General Assembly to demand Geelani’s proper burial and rites.

Kashmir is divided between India and Pakistan and has been claimed by both since they won independence from the British empire and began fighting over their rival claims.

He said Pakistan desires peace, but it is India’s responsibility to meaningfully engage.

India exercised its right of reply after the last leader spoke Friday, saying it was upon Pakistan, not India, to demonstrate good faith in engagement. An Indian diplomat said Pakistan needed to look inward before making accusations, and stressed that Kashmir was inalienably India’s. Pakistan then exercised its own right of reply, excoriating India once more.

Modi is set to address the U.N. General Assembly in person on Saturday, a day after a bilateral meeting with U.S. President Joe Biden.