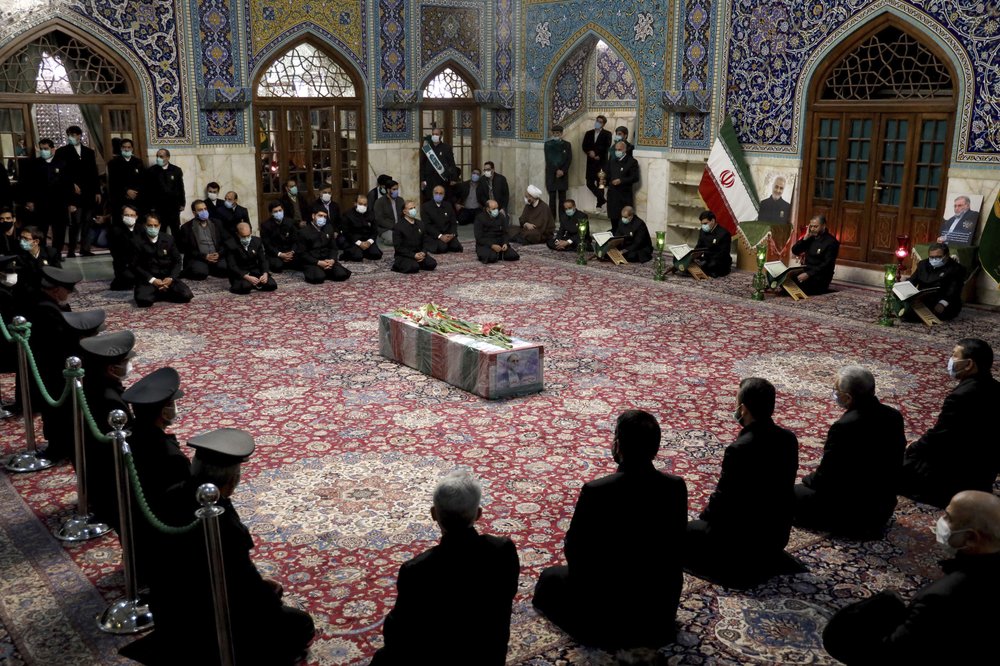 An opinion piece published Sunday by a hard-line Iranian newspaper urged Iran to attack the Israeli port city of Haifa if Israel carried out the killing of the scientist who founded the Islamic Republic’s military nuclear program in the early 2000s.

Though the hard-line Kayhan newspaper has long argued for aggressive retaliation for operations targeting Iran, Sunday’s opinion piece went further, suggesting any assault be carried out in a way that destroys facilities and “also causes heavy human casualties.”

Israel, suspected of killing Iranian nuclear scientists over the past decade, has not commented on the brazen slaying of Mohsen Fakhrizadeh. A military-style ambush Friday on the outskirts of Tehran reportedly saw a truck bomb explode and gunmen open fire on the scientist, killing him and a bodyguard.

Kayhan published the piece written by Iranian analyst Sadollah Zarei, who argued Iran’s previous responses to suspected Israeli airstrikes that killed Revolutionary Guard forces in Syria did not go far enough to deter Israel. He said an assault on Haifa also needed to be greater than Iran’s ballistic missile attack against American troops in Iraq following the U.S. drone strike in Baghdad that killed a top Iranian general in January.

Striking the Israeli city of Haifa and killing a large number of people “will definitely lead to deterrence, because the United States and the Israeli regime and its agents are by no means ready to take part in a war and a military confrontation,” Zarei wrote.

While Kayhan is a small circulation newspaper, its editor-in-chief Hossein Shariatmadari was appointed by Supreme Leader Ayatollah Ali Khamenei and has been described as an adviser to him in the past.

Haifa, on the Mediterranean Sea, has been threatened in the past by both Iran and one of its proxies, the Lebanese militant group Hezbollah. Haifa, Israel’s third-largest city, is home to a major port and power plant.

Such a strike likely would draw an immediate Israeli retaliation and spark a wider conflict across the Mideast. While Iran has never directly targeted an Israeli city militarily, it has conducted attacks targeting Israeli interests abroad in the past over the killing of its scientists, like in the case of the three Iranians recently freed in Thailand in exchange for a detained British-Australian academic.

Israel also is widely believed to have its own nuclear weapons, a stockpile it neither confirms nor denies possessing.

Israeli officials remained silent about the scientist’s death on Sunday. But Lt. Gen Aviv Kohavi, commander of the Israeli military, traveled to northern Israel for what the army said was a routine visit with commanders along the front with Syria. Earlier this month, Israeli warplanes struck Iranian-linked targets in Syria after Israel uncovered roadside bombs that it said were planted with Iranian guidance.

The Iranian parliament on Sunday held a closed-door hearing about Fakhrizadeh’s killing. Afterward, parliament speaker Mohammad Baqer Ghalibaf said Iran’s enemies must be made to regret killing him.

“The criminal enemy does not regret it except with a strong reaction,” he said in a broadcast on Iranian state radio.

A public session of lawmakers saw them chant: “Death to America!” and “Death to Israel!”

They also began the review of a bill that would stop inspections by the International Atomic Energy Agency. The nuclear watchdog has provided an unprecedented, real-time look at Iran’s civilian nuclear program following the country’s 2015 nuclear deal with world powers.

The deal has unraveled after President Donald Trump’s unilateral 2018 withdrawal of the U.S. from the accord. Iran’s civilian atomic program has since continued its experiments and now enriches a growing uranium stockpile up to 4.5% purity.

That’s still far below weapons-grade levels of 90%, though experts warn Iran now has enough low-enriched uranium to reprocess into fuel for at least two atomic bombs if it chose to pursue them. The proposed bill reportedly also would require Iran’s civilian atomic program to produce at least 120 kilograms (265 pounds) of uranium enriched to 20% — a short technical step to 90%.

Iran’s 290-seat parliament is dominated by hard-liners who likely would support the bill. It ultimately would have to be approved by Iran’s Guardian Council. Khamenei also has final say on all matters of state.

Khamenei has called Fakhrizadeh “the country’s prominent and distinguished nuclear and defensive scientist” and has demanded the “definitive punishment” of those behind the killing.

Fakhrizadeh headed Iran’s so-called AMAD program, which Israel and the West have alleged was a military operation looking at the feasibility of building a nuclear weapon. The IAEA says the “structured program” ended in 2003. U.S. intelligence agencies concurred with that assessment in a 2007 report.

Israel contends Iran is still intent on developing a nuclear weapon. It argues Iran’s ballistic missile program and other research could help build a bomb if it pursued one — especially as provisions of the 2015 nuclear deal expire. Iran long has maintained its nuclear program is peaceful.

Amos Yadlin, a former head of Israeli military intelligence who is now director of the Institute for National Security Studies, a Tel Aviv think tank, alleged Fakhrizadeh ran “all covert activities with weaponization of the program.”

The damage of his death “cannot be measured since nobody knows exactly the scope and the depth what the Iranians are doing covertly,” Yadlin said. “But no doubt that he was the core source of authority, knowledge and organization of this program.”

Fakhrizadeh’s killing likely complicates the plans of President-elect Joe Biden, who has said his administration will consider reentering Tehran’s nuclear deal with world powers. It also raises the risk of an open conflict in Trump’s final weeks in office, as any retaliation could provoke an American military response, Yadlin said.

“I highly recommend to the officials to keep their mouths closed and not leak anything. They’ve already spoken too much,” he said, referring to cryptic remarks by Israel’s Prime Minister Benjamin Netanyahu to his supporters that he could not discuss everything he did last week.

“Any more evidence that will help the Iranians to decide on retaliation against Israel is a mistake,” Yadlin said.

AP — AMIR VAHDAT and JON GAMBRELL contributed to this report.