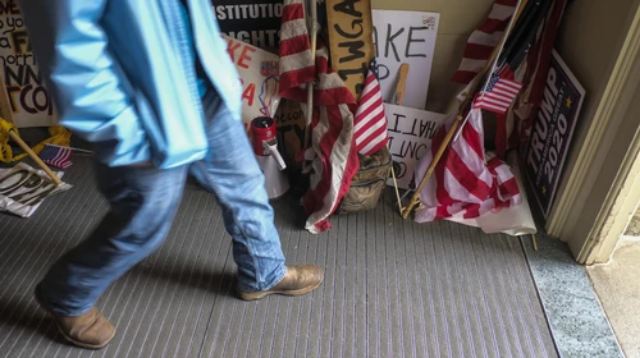 The self-styled militiamen who plotted to kidnap the governor of Michigan also discussed storming the state Capitol to “stage a week-long series of televised executions of public officials,” according to prosecutors.

The men—many of whom were allegedly affiliated with the “Wolverine Watchmen,” a Michigan-based militia—had devised a “Plan B” and “Plan C” if the kidnapping plot didn’t work out. Plan B was going to be the gruesome televised execution plot, facilitated by more than “200 combatants” who would seize control of the Capitol, according to ABC7.

Plan C, according to prosecutors, would have involved burning down the statehouse while lawmakers were locked inside, “leaving no survivors.”

The disturbing new details came to light through court documents filed this week as part of the pending cases brought by state and federal officials against 14 defendants from Michigan, Ohio, Wisconsin, and Delaware.

Some of the men implicated in the plot first came onto the FBI’s radar in early 2020, when agents were monitoring online discussions about a “violent overthrow of certain government and law enforcement components,” prosecutors said. Back then, much of the grievances from the fringe far-right were narrowly focused on proposed gun control legislation, specifically in Virginia, where the newly-Democratic legislature was attempting to usher in an era of firearm regulation.

When the COVID-19 pandemic took hold in the U.S., those vague discussions of tyranny found a new focus: coronavirus-related lockdowns and restrictions. Michigan emerged as a hotspot for anti-lockdown activism—and activity associated with the nascent anti-government “Boogaloo” movement, which many of the defendants were loosely affiliated with. Armed men even swarmed Michigan’s Capitol at one point.

Democrat Gov. Gretchen Whitmer was also vilified in right-wing media for measures she introduced to curb the spread of COVID-19. A group of men joined forces with the Wolverine Watchmen, as they developed the kidnapping plot against Whitmer, and trained together.

Other governors were also considered potential targets, according to court filings. Democrat Gov. Ralph Northam of Virginia was one, largely over his support for gun control. South Carolina Gov. Henry McMaster was also considered to be a target for his COVID-19 restrictions. Now, as COVID-19 cases spike nationwide and the country closes down again, state officials remain on high alert for possible retaliatory violence.

“We have threats that stream into my office daily,” Illinois Gov. JB Pritzker said on Tuesday, according to ABC7. “While we have watched the kidnapping plot against the Michigan governor unfold just a state away.”