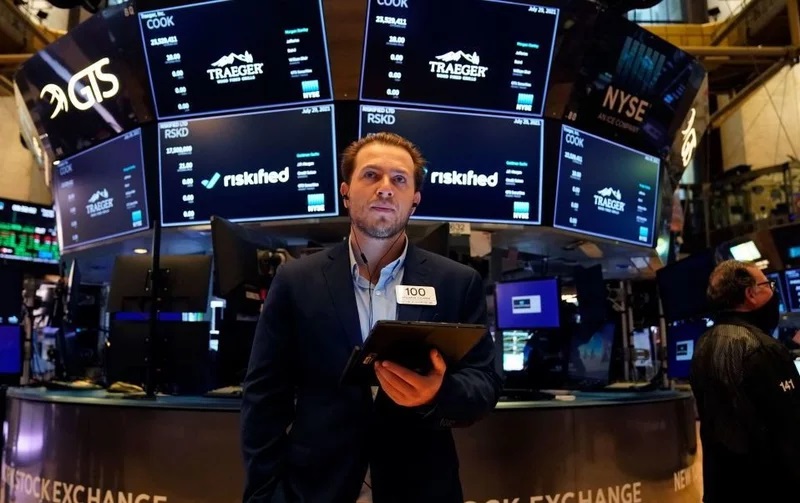 One of the members of Congress — Democratic Rep. Tom Suozzi of New York — failed to file required reports on approximately 300 transactions, according to the complaint from the Campaign Legal Center.

Five of the seven lawmakers sit on the powerful House Financial Services Committee.

It's the latest example of a bipartisan trend that has emerged almost 10 years after Congress overwhelmingly passed a law to provide transparency and show lawmakers aren't profiting from their jobs: Members of Congress are ignoring the disclosure law.

Under the STOCK Act — Stop Trading on Congressional Knowledge Act — lawmakers must file a report when they buy or sell stock. The form, known as a periodic transaction report, or PTR, must be submitted within 45 days of the transaction and is then made public. To date most allegations of STOCK Act violations involve members filing months — or in some cases more than a year — after the required window for submitting a report.

What makes the complaints filed Wednesday different is that it appears these members never filed reports at all. The Campaign Legal Center learned about the issues after reviewing financial disclosure forms for all members of Congress. It compared the 2019 forms with the 2020 forms and discovered discrepancies with these lawmakers' holdings. But it did not find any PTRs to reflect the new transactions.

A spokesperson for Suozzi said, "The Congressman's investments are managed through independent advisors with discretion over all transactions. Every transaction has been reported on his annual financial disclosure and all proper periodic disclosures will be filed on a going forward basis."

Still, The Campaign Legal Center is asking the Office of Congressional Ethics, the outside, nonpartisan entity that screens cases and can make referrals to the House Ethics Committee, to look into these members' activities.

Group says members of Congress are flouting the law

"The lack of accountability we've seen in regard to STOCK Act compliance is basically giving elected officials the green light to buy and sell stocks based on information gained from committee meetings without any transparency for their voters," Kedric Payne, general counsel and senior director of ethics at the Campaign Legal Center, said in a written statement. 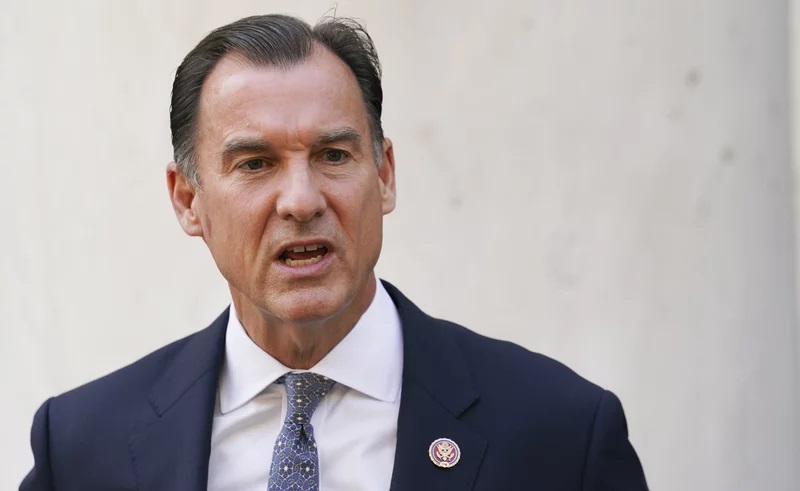 The values and number of transactions vary in the seven complaints from the Campaign Legal Center. According to center's legal filings:

Axne didn't file any PTRs in 2019 and 2020, and the center's complaint indicates it found more than 40 assets with a total value of $43,043 to $645,000.
The complaint against Davidson lists the sale of Workhorse Group stock worth between $50,000 and $100,000 in 2020 but notes no disclosure form was filed.
Gooden's annual financial disclosure reflects a dozen stock purchases (American Airlines, APA Corp., Royal Caribbean Cruises, Delta, Hertz, Luckin Coffee, Marathon Oil, Occidental, Ovintiv, Plains All American Pipeline, Sotherly Hotels and United American Holdings) that were valued between $60,019 and $376,000 in 2020. But no PTRs were filed disclosing the initial investments, according to the complaint.
San Nicolas failed to file reports for two trades, according to the complaint — one in 2019 for a call option in Yamana Gold and one in 2020 for Livent stock valued between $15,000 and $52,370.
Scott did not disclose four stock transactions in 2020 worth between approximately $4,004 and $60,000. These were purchases for Air Products and Chemicals, Carlisle Cos., Linde PLC and RPM International, according to the complaint
Suozzi failed to disclose about 300 transactions from 2017 to 2020, according to the Campaign Legal Center complaint, with a value of $3.2 million to $11 million. This included roughly 64 transactions in 2017 valued between $456,064 and $1,868,000; 31 transactions in 2018 valued between $528,031 and $1,445,00; 104 transactions in 2019 worth $1.1 million and $3.8 million; and 104 in 2020 worth between $1.1 million and $4 million. He disclosed the trades on annual disclosures but did not file PTRs.
Williams did not file PTRs for three stock sales in 2019. The complaint lists sales of three assets by a spouse in 2019 — General Electric, Nvidia and the Walt Disney Co. — worth a total value of approximately $3,003 to $45,000.

NPR reached out to all seven members for a response to the complaints.

In a written statement to NPR, Gooden dismissed the complaint, saying, "There were no transactions above the reporting threshold for PTRs which is why none were filed. I would encourage anyone filing frivolous ethics complaints to consult page 41 of the 2020 Financial Disclosure Guide regarding the rule on PTRs."

Christine Ravold, a spokeswoman for Davidson told NPR that the PTR was filed but an error on the House Clerk's website failed to publish it so it was visible to the public. NPR contacted the Clerk's office. Ravold shared a copy of the form that includes a digital signature from March 25, 2021 and maintained the Congressman is in "full compliance" and "places a premium on transparency and accountability."

And in an email response, a spokesperson for Axne said that the congresswoman does not personally manage or execute trades and that she has submitted all required disclosures during her time in office. "If there are errors with those disclosures, they are unintentional and the Congresswoman will take immediate and all necessary steps to ensure her disclosures are accurate and in accordance with the law."

The story will be updated with any additional responses.

In early 2020, PTR disclosures revealed investment activity by several senators followed briefings on the pandemic — before the markets collapsed — and the emerging public health threat. The senators' investment actions came under intense scrutiny. The Justice Department reviewed allegations of insider trading but closed the cases without any charges.

Democratic Sen. Kirsten Gillibrand of New York, who was an attorney before entering public office, helped write the STOCK Act. She points to the Justice Department investigations as proof the law is working.

"We've had several examples where members of Congress bought or sold stocks that pertain to their work, and there actually were follow-up investigations to see whether or not they bought or sold those stocks based on nonpublic inside information," Gillibrand told NPR.

She maintains that the authority the statute gave the Justice Department to prosecute members is the primary method to ensure the law is working. She said the ethics committees have oversight roles, "but the purpose of the STOCK Act was to make it very clear that these are criminal violations."

Democratic Sen. Jeff Merkley of Oregon, who voted for the 2012 law, is blunt about how it's working now. "The STOCK Act is pretty much useless," Merkley told NPR.

He said he believes the major issue is enforcement. "It's extremely difficult to know when a person in Congress has traded stocks because of information they heard publicly versus information that they've heard privately."

Before the Campaign Legal Center filed its latest complaints, the group had already lodged about a half-dozen other complaints to the ethics committees about possible violations of the STOCK Act.

In the Senate, the organization pressed the Ethics Committee in August to look into GOP Sen. Rand Paul of Kentucky, who reported his wife's purchase of pharmaceutical stock for a manufacturer of an antiviral drug over a year later. This drug was later approved to treat COVID-19. Paul noted that his wife lost money on the trade and that it was an oversight the form was not filed on time.

The Campaign Legal Center also filed a complaint against Republican Sen. Tommy Tuberville of Alabama over improper disclosure over 100 transactions. Tuberville said he was unaware of the late reports but submitted the information.

"At least 15 members from the House and Senate have not complied with the requirement to disclose their stock trades. But we are not aware of any fines that the ethics committees have required these members to pay," the Campaign Legal Center's Payne said. The ethics panels can launch their own reviews. But so far no lawmaker in the House or Senate has faced any formal sanction related to the STOCK Act. And while they may get fined, those fines are not made public.

Payne worries the scrutiny following the senators' investments after the pandemic briefing appears to have given some members pause about filing forms on time. "Right now, it seems to be a trend that members ... just wait until the end of the year, file the report and completely ignore the STOCK Act. So they are circumventing this rule and doing it without any consequence."

Instead it's fallen to watchdog groups such as Payne's or media outlets such as Business Insider to bring violations to light. Insider found Republican Rep. Blake Moore of Utah filed late. He said that was an oversight, and NPR confirmed he has paid a fine. The news site also has reported on others, including Democratic Rep. Tom Malinowski of New Jersey, who transferred his assets to a blind trust after he faced questions about not reporting dozens of trades. NPR learned Malinowski paid a $200 fine. Merkley said he thinks it's time to ban all lawmakers from trading individual stocks altogether.

"It is a huge conflict of interest for someone to be trading in, say, pharmaceutical stocks at the same time as making policy for pharmaceutical companies," he said. He has introduced a bill that would require members to divest within six months of taking office and limit investments to mutual funds.

"It is not a popular topic among my colleagues," Merkley said dryly. He said without a change members keep themselves open to new allegations. "I can guarantee you that every year there'll be a scandal related to stock trading."

He has support from some of his Democratic colleagues in the Senate, including Gillibrand. But she also said there's a need for a STOCK Act 2.0 to look at all the different ways members may benefit financially from their work. One new development she flagged is that lawmakers received small-business loans from the COVID-19 relief bills.

And she said she thinks transparency regarding investments needs to go beyond Capitol Hill. Gillibrand said she has "deep concerns about the judiciary and the Supreme Court." She noted that justices are allowed to take privately funded trips paid for by people who have interests before the court.

Congress created the STOCK Act to ensure transparency. But if nothing changes and more lawmakers keep failing to report their investments, it will be tough for the public to know whether the people they elected are making decisions to benefit their constituents or themselves.