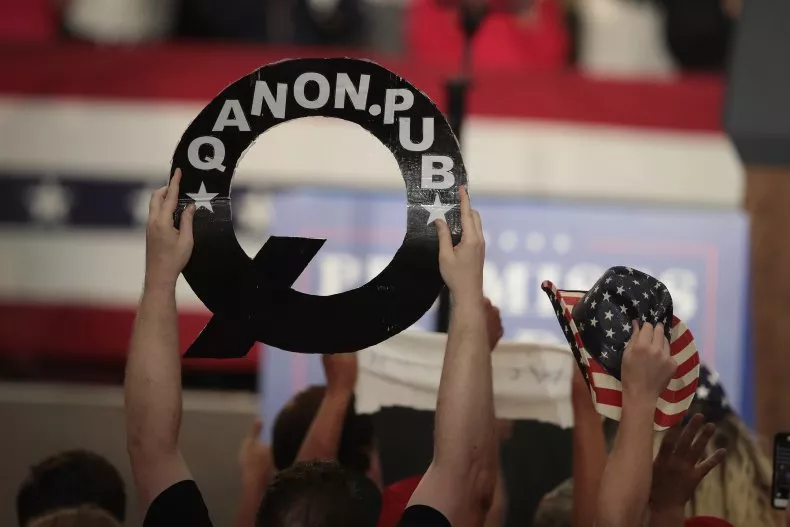 A United States Postal Service (USPS) worker in Pittsburgh, Pennsylvania, charged with delaying or destroying mail has been linked to QAnon conspiracy theories online, according to reports.

Sean Troesch, 48, a City Carrier who worked out of the Post Office in Mount Oliver, is one of two USPS workers accused of dumping undelivered mail by prosecutors.

According to the criminal complaint, an allegation was made that a mail carrier was seen taking bags of mail from his vehicle and placing them into trash bags on or around October 8.

On Sunday, October 11, a Special Agent with the office of USPS Inspector General received a report that Troesch had placed nine trash bags in front of his house in the Baldwin area of Pittsburgh, one day before pickup was scheduled in his neighborhood.

Special Agents spoke to Troesch about the trash bags later that day. At first Troesch said that only one of the trash bags in front of his house contained mail, before later admitting that all nine did.

Troesch told investigators that the mail had been intended for delivery on his route.

The bags which were recovered from the trash and in front of the suspect's house contained 314 items of First Class Mail—including a request for the delivery of a mail-in ballot—seven items of Certified Mail, one item of Priority Mail, and 1,311 political advertisements or similar items of campaign mail.

Prosecutors said the seized mail did not contain any mail-in ballots.

After the office of USPS Inspector General confirmed that a mail carrier was under investigation, the Pittsburgh City Press obtained screen shots from a Facebook account believed to have belonged to Troesch which frequently pushed the baseless right-wing conspiracy QAnon.

According to screenshots from the now deleted account, Sean J. Troesch posted cartoons implying that mainstream media is ignoring child trafficking and pedophilia in the U.S. and is instead focusing on "staged race riots."

One of the key beliefs of QAnon supporters is that President Donald Trump is waging a secret war against the "deep state" and high-profile Satan-worshipping pedophiles and cannibals.

The theory, which originated on infamous online message board site 4Chan, has ties to the "pizzagate" theory which falsely alleged influential Democrats, including Hillary Clinton, were connected to a child sex ring linked to a pizza restaurant in Washington, D.C.

The account also shares a post from QAnon supporter Liz Crokin, who accuses "satanic pedophiles" such as Patton Oswalt and Chrissy Teigen of promoting pedophilia on Twitter and claiming that "Pizzagate is real."

The Troesch account also shared QAnon theories that furniture company Wayfair was advertising trafficked children under the guise of selling expensive items, as well as expressing a number of anti-lockdown and quarantine sentiments amid the coronavirus outbreak.

Facebook has been contacted about whether the account was removed as part of the social media site's crackdown on QAnon followrs spreading misinformation on the platform, or if the user removed it themselves.

Elsewhere, a Twitter account @lemieux66t which is linked to the name Sean Troesch has also frequently retweeted a number of conspiracy theories involving the trafficking of children, as well as sending tweets with a " WWG1WGA" hashtag, an abbreviation of the QAnon slogan "Where we go one we go all."

Announcing the charge against Troesch, Attorney Scott W. Brady said: "During this election season, the integrity of the mails is more important than ever.

"When any public employee, including a mail carrier, violates the law, we will respond quickly. These carriers each attempted to destroy mail, including both political advertisements and an application for a mail-in ballot. Anyone who would obstruct or delay United States mail that includes election-related materials should know that the Department of Justice will take quick, efficient action against them."

"However, when one of those employees decide to violate the trust placed in them, Special Agents with the U.S. Postal Service Office of Inspector General will conduct a thorough investigation, and seek criminal prosecution and termination of employment when appropriate. USPS OIG Special Agents are committed to ensuring that all election and political mail is delivered without delay or disruption."

A second Pittsburgh Postal Service worker, James McLenigan, 29, is also charged with one count of delay or destruction of mail by a postal employee after surveillance footage allegedly showed him throwing mail into a trash bin Lawrenceville on October 8.