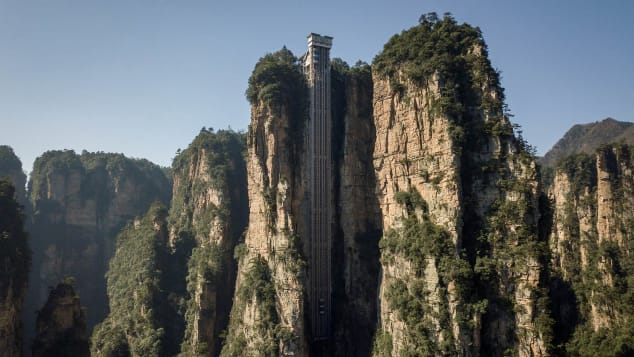 With the recent release of behind-the-scenes underwater photos from upcoming movie "Avatar 2," combined with news that "Avatar 3" is almost done filming, there's perhaps no finer time to revisit the national park that many believe inspired the incredible scenery of the original film.

The Zhangjiajie National Forest Park in Hunan, China is famed for its towering, pillar-like karst formations, and bears a remarkable resemblance to the floating landscape of alien-world Pandora, which plays a starring role in the movie.

One of the fastest and most effortless ways to experience the area is by riding up the world's tallest outdoor elevator.

The 326-meter-tall glass Bailong Elevator was built onto the side of a cliff in the national park and offers stunning views of the karst formations.

The Bailong Elevator consists of three double-decker lifts, each of which can transport as many as 46 visitors up the mountain in less than two minutes per trip.

It serves as an easy gateway to some of the main attractions of the park including Golden Whip Stream, Tianzi Mountain and views of the Southern Pillar of Heaven -- which was later renamed "Hallelujah Mountain" in honor of "Avatar" director James Cameron's floating mountains.

Alternatively, visitors can hike up the mountain, which takes about 2.5 hours.

Completed in 2002 with a hefty price tag of RMB 180 million ($27 million), the lift hasn't always been celebrated. Local experts and scholars initially criticized the project, saying construction of the Bailong Elevator, which began in 1999, damaged the natural scenery.

Weighed down by debates and safety concerns, lift operations were halted three months after it first opened. Demolition was discussed, but the elevator ended up reopening 10 months later -- a saga documented by China's state-run broadcaster CCTV.

Some 18 years after its opening, the Bailong Elevator remains one of the hottest attractions in the park. It carried up to 18,000 tourists each day before the Covid-19 outbreak.

Following weeks of lockdown, Zhangjiajie reopened in March this year.

Jin Xin, Zhangjiajie's executive vice president and secretary of the board, told China's National Business Daily that daily visitor numbers have recovered to 70% of pre-Covid figures.

Zhangjiajie is also home to the world's tallest bungee jump as well as the famous but now-closed Zhangjiajie Grand Canyon Glass Bridge -- which was the highest and the longest glass bridge of its kind.

CNN — contributed to this report.