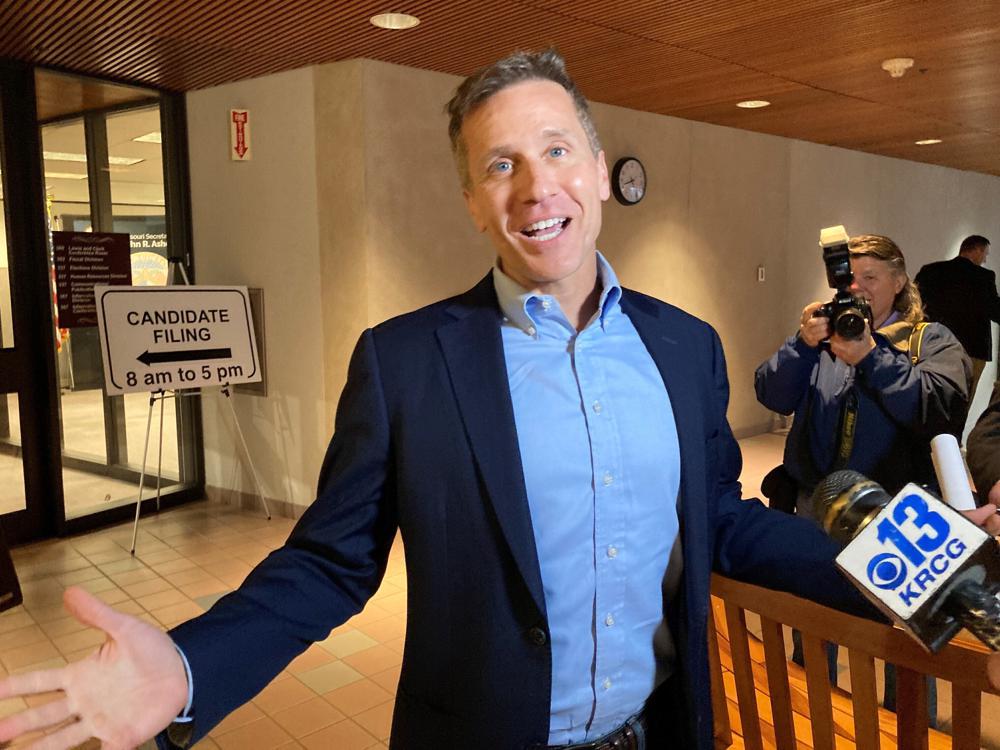 In Missouri, scandal-ridden former Gov. Eric Greitens is attempting a political comeback. In Michigan, a crowded field of Republican gubernatorial candidates includes a man charged in the Jan. 6 U.S. Capitol attack. In Arizona, a prominent figure in the QAnon conspiracy movement is running for the U.S. House.

Those are among some of the most notable contests in Tuesday’s primary elections being held in six states.

Arizona, which Democrat Joe Biden narrowly won in 2020, is a top target for former President Donald Trump, who tried in vain to get his defeat overturned. He has endorsed a slate of candidates up and down the ballot who have promoted his false claims of a stolen election.

Trump has also been zeroed in on the 10 House Republicans who voted to impeach him over the Jan. 6 insurrection. Three of them are on the ballot Tuesday in Washington state and Michigan, as are two members of “the Squad,” Democratic Reps. Cori Bush of Missouri and Rashida Tlaib of Michigan.

Meanwhile, Kansas voters could clear the way for the Republican-controlled Legislature to further restrict or ban abortion if they approve a proposed state constitutional change. It’s the first referendum vote on abortion policy by a state since the U.S. Supreme Court overturned Roe v. Wade in June.

Ohio is also holding a primary for state legislative races on Tuesday, three months after its statewide and congressional contests — a split system that resulted from legal wrangling over redistricting.

Trump’s endorsed candidates in Arizona all have one thing in common: They have loudly disseminated misinformation about the legitimacy of the 2020 election, despite election officials and Trump’s own attorney general saying there is no credible evidence the race was tainted.

In the governor’s race, Trump has backed former television news anchor Kari Lake, who has said that she would not have certified Arizona’s election results in 2020. Lake faces businesswoman Karrin Taylor Robson, who is endorsed by former Vice President Mike Pence and outgoing Gov. Doug Ducey.

Secretary of State Katie Hobbs, a staunch defender of the 2020 election, is strongly favored to win the Democratic nomination for governor.

In the Republican primary for U.S. Senate, Trump has backed tech investor Blake Masters as the candidate to go up against Democratic incumbent Mark Kelly in the fall. Masters, whose campaign has been bankrolled by billionaire Peter Thiel, has called for reducing legal immigration and espoused the baseless “great replacement” conspiracy theory, claiming Democrats are trying to “replace Americans who were born here.”

Attorney General Mark Brnovich, another Senate candidate, has been weighed down by lackluster fundraising and fierce criticism from Trump, who says Brnovich did little to advance his election fraud claims. Another top candidate, Jim Lamon, the founder of a solar energy firm, was a fake elector for Trump in 2020, signing a certificate falsely saying that the then-president had won the state.

The Republican primary for secretary of state includes Trump-backed legislator Mark Finchem, a state representative who worked to overturn Trump’s 2020 loss; state Rep. Shawnna Bolick, who introduced a bill to let legislators ignore election results and choose their own presidential electors; and state Sen. Michelle Ugenti-Rita, who has long pushed to overhaul election laws. The GOP establishment has rallied around advertising executive Beau Lane in the race.

Ron Watkins, who has ties to the QAnon conspiracy theory, is considered a long shot in his House run. Watkins, a Republican, served as the longtime administrator of the online message boards that became the home of the anonymous “Q.” The conspiracy theory is centered around the baseless belief that Trump waged a secret campaign against enemies in the “deep state” and that a group of satanic, cannibalistic child molesters secretly runs the globe.

In the state Legislature, Arizona House Speaker Rusty Bowers, who testified at a Jan. 6 hearing about Trump’s pressure to overturn the 2020 election, faces a Trump-backed candidate in his bid to run for the state Senate.

The Republican primary for governor was wild from the start, with five candidates getting kicked off the ballot for failing to file enough valid nominating signatures.

Several of the remaining candidates have baggage that could hurt in a general election against Democratic Gov. Gretchen Whitmer.

Real estate broker Ryan Kelley has pleaded not guilty to misdemeanor charges after authorities said he rallied Trump’s supporters to storm the U.S. Capitol. Businessman Kevin Rinke was sued in the 1990s for sex harassment and racial discrimination — allegations he says were lies. Chiropractor Garrett Soldano hawked supplements he falsely claimed treated COVID-19. Conservative commentator Tudor Dixon, who has been endorsed by Trump, has previously acted in low-budget horror pictures.

All of the candidates falsely say there was fraud in the 2020 election, with Dixon, Kelley and Soldano saying the election was stolen from Trump.

Republican Rep. Peter Meijer is hoping to hold on to his seat after voting to impeach Trump. The former president has endorsed businessman and missionary John Gibbs, who worked in the Trump administration under Housing Secretary Ben Carson.

Greitens’ political career appeared over when he resigned as governor in 2018, following his admission to an extramarital affair and accusations of blackmail and campaign finance violations. On Tuesday, the former Navy SEAL officer has a chance at redemption in his Republican primary for the seat held by retiring GOP U.S. Sen. Roy Blunt.

Greitens, Attorney General Eric Schmitt and U.S. Rep. Vicky Hartzler are the front-runners in a crowded 21-person GOP field that includes U.S. Rep. Billy Long and Mark McCloskey, the St. Louis lawyer who along with his wife pointed guns at racial injustice protesters who ventured onto their private street.

Trump has not made an endorsement in the race, though he’s ruled out Hartzler.

The GOP winner in Missouri, a solidly Republican state, will be favored in November. But Republican leaders have long worried that Greitens — his ex-wife has also accused him of abuse, allegations Greitens has called “baseless” — could win the primary but lose the general election.

On the Democratic side, the nomination appears to be up for grabs between Lucas Kunce, a Marine veteran and self-proclaimed populist, and Trudy Busch Valentine, an heiress of the Busch beer fortune who has largely self-funded her campaign.

Rep. Jaime Herrera Beutler, who has been in Congress since 2011, has said she voted for impeachment because she had “an obligation to the Constitution.” Trump has endorsed Joe Kent, a former Green Beret and a conservative cable show regular who echoes the former president’s grievances about the 2020 election outcome.

Rep. Dan Newhouse, a congressman since 2015, said he cast the vote to impeach Trump for inciting and refusing to immediately stop the Jan. 6 insurrection. Among his challengers is Loren Culp, a Trump-backed former small-town police chief who refused to concede the 2020 governor’s race to Democrat Jay Inslee.

In Washington, the top two vote-getters in each race, regardless of party, move forward to November.

Voters will decide whether to approve a change to the state constitution that could allow the Legislature to restrict or ban abortion despite a 2019 state Supreme Court ruling that abortion access is a fundamental right. It’s the first referendum on abortion by a state since Roe v. Wade’s reversal.

In statewide races, Republican Kris Kobach is running for attorney general as he attempts a political comeback following losses in races for governor and U.S. Senate in previous years. Kobach, the state’s former secretary of state, served as vice chair of a short-lived Trump commission on election fraud after the 2016 election.