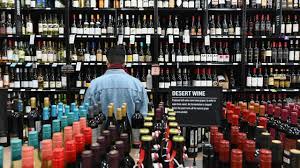 A fair warning for your next trip to the liquor store: Several states across the U.S. are still experiencing booze shortages related to COVID-19, and it's unclear when supply will be able to meet demand.

Early in the pandemic, it was common to find libations low in stock after some liquor stores briefly closed amid statewide lockdowns and skyrocketing consumer demand for alcohol.

But continued reports of shortages from Vermont to New Jersey to Ohio persist more than a year later, and some states are rationing their liquor supply amid ongoing supply chain issues.

The Pennsylvania state board in charge of consumer liquor sales announced last week that it was limiting customers to two bottles of certain alcoholic beverages per day. The Pennsylvania Liquor Control Board said the purchase limit on select items — including Hennessy Cognac, Buffalo Trace bourbon and Patrón tequila — will be in place for the "foreseeable future."

Liquor store customers in North Carolina are encountering "out of stock" signs instead of their favorite spirits, local TV station WTVD reported, amid an ongoing supply shortage there, too.

"I don't think anybody saw the kind of demand that we're seeing right now — particularly in those high-end and super-premium products — coming," said David Ozgo, chief economist of the Distilled Spirits Council of the United States.

Why liquor is running low in many states

According to Ozgo and others, there are problems at nearly every step of the alcohol beverage supply chain.

Some producers are struggling to source glass bottles. The cost to import liquor from overseas has shot up because of price increases in international shipping. And actually delivering booze to bars, restaurants and other vendors has been hampered by a shortage of truck drivers.

"So all along the line, you almost have a compounding effect," Ozgo said, adding that some of these problems existed before the pandemic but grew worse over the past year.

Shawn Kelly, the spokesperson for the Pennsylvania liquor board, said some businesses are also having staffing issues.

But there is another big problem, one that occurs before any alcohol even touches the bottle.

Many liquors simply take a long time to make. Producers have to grow or buy the ingredients, distill the spirit, then let it age. That means producers must anticipate demand years in advance. They can't simply turn on the spigot when demand rises.

"You can't go back five years and retroactively plant more agave," Ozgo said of the plant used to make tequila. "It doesn't work that way."

The distiller Buffalo Trace, whose bourbon is currently limited to two bottles per day for customers in Pennsylvania, is undertaking a $1.2 billion expansion but says it will still be "a few years" before it can fully meet consumer demand.

"Buffalo Trace recognizes this is not the news its fans want to hear for the next few years but making great whiskey does take time and the Distillery is not prepared to cut quality corners to increase short term supply," the company said in a press release.

What it means for drinkers

The statewide policy change in Pennsylvania, which stems from the fact that its government controls the sale of spirits and operates all of the commonwealth's retail stores, affects millions of residents.

"[W]e believe the shortages are out of their control," Chuck Moran, executive director of the Pennsylvania Licensed Beverage and Tavern Association, said of the state board's decision.

The association represents small-business taverns and licensed restaurants. Moran says that while he understands there are supply chain issues, it's small businesses and customers who pay the price.

"Unfortunately, since taverns and licensed restaurants — as well as the general consumer who walks into a state liquor store — are at the tail end of the chain, it does have a negative impact."

In Virginia, another state where the government is in charge of alcohol sales, customers are only allowed to buy one bottle of certain liquors per day. Part of that is to make special edition booze available to more people, but state officials say it is also the result of skyrocketing demand during the pandemic.

Ozgo, with the Distilled Spirits Council, said that outside of so-called "control states," it would be up to individual liquor stores to determine whether to limit the sale of certain products.