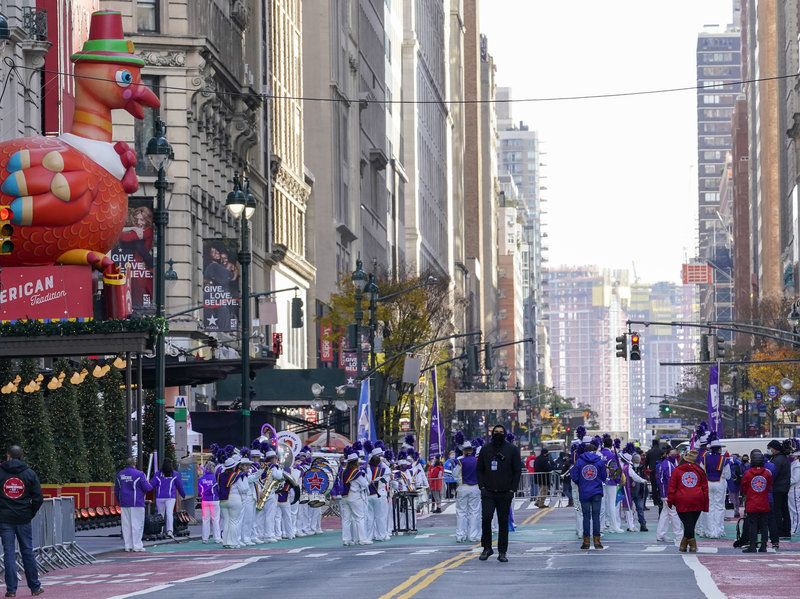 For just shy of a century, the Macy's Thanksgiving Day Parade in New York City has been synonymous with the holiday. (Thanksgiving Day football games, a close second, started a decade later in 1934.)

But this year will be unlike any other. With coronavirus cases spiking across the country, the department store will hold a modified version of the parade.

Every year, thousands of spectators flock to the parade to see the towering balloons, decorative floats, acrobats, performers and more as they make their way down the 2.5-mile stretch of Midtown. But this year, Macy's had to work with city and state officials to have a parade at all, according to the parade website.

Instead, the event will take place in the one-block stretch in front of Macy's flagship store on 34th Street from 9 a.m. ET to noon, with no crowds in attendance to help mitigate the spread of COVID-19. It will be televised nationally on NBC on Thursday, at 9 a.m. local time.

Giant balloons will still fly, but without their 80 to 100 handlers. Much of the parade was pre-taped over three days for the televised event. About 8,000 participants usually help out with the parade — but this year, that number has been reduced by about 88%. And all participants will wear a mask.

Making his Macy's Thanksgiving Day Parade debut this year will a 48-foot-tall version of The Boss Baby, the central character from the 2017 DreamWorks Animation film by the same name. Joining him will be some old favorites: Snoopy, Pikachu, Ronald McDonald, the Pillsbury Doughboy, SpongeBob and more.

According to Macy's, over 50 million people watch the parade from home. And although this year will be different, the Macy's time-honored tradition will give people something cheerful to look forward to.

"Traditions like this are comforting and they're uplifting," Susan Tercero, the parade's executive producer, told the Associated Press. "New York has always been a tough city. It bounces back. It takes its blows and then it continues on. And I think it's extremely important for us to be that display this holiday season. Regardless of what's happened, New York needs to be that beacon of light in the darkness and this parade, I think, is symbolic of that."